The City of Moundsville 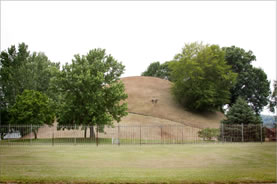 Moundsville, West Virginia is located in Marshall County which is considered part of what many call the Ohio Valley. It is a small town, located on the Ohio River, consisting of roughly 10,000 residents. While there are many reasons to enjoy living in Moundsville there are three distinct features of this small town that are most enjoyable. First, Moundsville is a town with a unique historical significance; second, it offers a plethora of site-seeing opportunities; third, it provides a good environment to raise a family.

Moundsville has a rich past that gives one a glimpse into the early history of this great country. Flat land is rare in this part of the country, and an earlier race of people cherished this location. The town’s first inhabitants are considered to have been the Adena Indians, who were responsible for the creation of what is now called “Grave Creek Mound.” Grave Creek Mound which is the largest conical mound east of the Mississippi River was a burial mound for the Adena Indians. It is sixty-nine feet high, two hundred and eighty feet across and dates from around 250 B. C. In 1770 a pioneer named Joseph Tomlinson built a fort to protect his family and settled on the forest flats. The settlement of the Tomlinson community was originally called Elizabethtown but in 1830 became part of what is now called Moundsville.

While Moundsville attracts many historians because of Grave Creek Mound there are several other sites to see in this small town. Many come to Moundsville to tour the West Virginia State Penitentiary. This retired state penitentiary is Gothic in style and was built not long after the American Civil War. When West Virginia seceded from Virginia they were in need for state institutions and Moundsville was chosen as the perfect location for the state penitentiary because of its close proximity to Wheeling, West Virginia which at the time was the state capital. It served as an active prison from 1876 to 1995.  It has appeared in many books, movies, and television shows. It continues to be an attraction today! The area is also a popular destination for those that love nature. Moundsville is located at the foothills of the Appalachian Mountains and rests alongside the Ohio River which affords the photographer and outdoorsman with many opportunities for enjoyment.

In addition, Moundsville provides a good family environment for parents and children. The schools in Marshall County have modern facilities and equipment by which they provide quality education for the area youth. There are also several places for children of all ages to enjoy recreation such as Grand Vue Park, East End Park, Marshall County Fairgrounds, and the Four Seasons pool. Parents will enjoy themselves shopping in the shopping district of Moundsville, the mall in St. Clairville, OH, and the newly established shopping center known as the “Highlands” located in Wheeling, WV. Most importantly, Christian parents and children will be spiritually fed at the church of Christ at Hillview Terrace and other faithful congregations that adhere strictly to Bible principles.

When one considers the

present day state of Christianity, with more than 20,000 separate  fellowships claiming Christ world wide (Barrett, 17), it obvious that this is not the condition of the Church Jesus promised to build, for which He died, and for which He prayed might be One (Matt. 16:18; Acts 20:28; John 17:21).  If this is not the state that Jesus intended, what should be done by those desiring to be pleasing to Christ?

The restoration plea is a plea for the authority of Christ.  “And whatsoever you do in word or deed, do all in the name of the Lord Jesus” (Col. 3:17).  This authority is found in His will revealed in the New Testament, not in the words of men, creeds or councils.

The restoration plea is a plea to return to God’s original plan as revealed in the Scriptures.  It is a conviction that departures from the intended divine arrangement are not beneficial, but in fact are detrimental to Christianity.  It is a determination to allow the Bible to be our guide and follow its model for salvation, worship, and practices.  It is a belief that such a plea is not only desirable but possible.  It is an attitude of humility to seek to be pleasing to God and not ourselves.  If we believe what the first Christians believed; if we do what they did, we will be Christians, no more, no less!

The study of Restoration history is to study the attitudes that have been held in regard to the Scriptures.  It is to trace the developments in the understanding that the Bible is to be our guide, but also to accurately understand its content.  “If any man speaks, let him speak as the oracles of God” (1 Pet. 4:11). Come study with us in the heart of the Restoration Movement!

Restoration History of the Ohio Valley

The upper Ohio Valley was a cradle for the American Restoration movement. It bears witness to the triumph of the message that spread “like fire in dry stubble” across the regions of Ohio, West Virginia, western Pennsylvania and central Kentucky. But the Valley also testifies to the sad tragedy of division within the Restoration ranks.

Important early sites in the Restoration Movement are found here: Washington, Pennsylvania, where Thomas Campbell first published his Declaration and Address in 1809; Brush Run, Pennsylvania, where Thomas and Alexander Campbell organized the Brush Run Church after their break with Presbyterianism; Mt. Pleasant, Ohio scene of Campbell’s first debate on infant baptism in 1820. Foremost among these sites is Bethany, West Virginia, home to Alexander Campbell. Students are able to see his home and its furnishings, along with his octagonal study, the cemetery known as “God’s acre,” the church building at Bethany, and Bethany College with its library, housing many of Campbell’s books.

The Restoration message was forged in the studies and writings of the men of the movement. First among these was Barton W. Stone at Cane Ridge, Kentucky. This pioneer, who penned the Last Will and Testament of the Springfield Presbytery, cleared the way for the success of those who would follow. Thomas and Alexander Campbell, leaving the religious views of their forbears, blazed a trail to return to New Testament Christianity. Their plea was promoted

in the preaching of the “Voice of the Golden Oracle,” Walter Scott and numerous others. It was advanced in the crucible of debate. It was disseminated in wide spread fashion through the use of the printed page like Campbell’s Christian Baptist and Millennial Harbinger. Joined with Stone’s Christian Messenger, these publications left a lasting legacy of the ardent desire to unite Christians through restoration.

Interpretive differences over the Scriptures, aggravated by social divisions brought on by the Civil War and its aftermath, led to a separation of fellowship among many congregations in the Ohio Valley. While some congregations can trace their roots to the pioneering work of first generation leaders like Stone, Campbell, and Scott, numerous others began in the period of division at the end of the 19th and the beginning of the 20th century.

Leaders in this new era were men whose sacrifices and struggles have not been told. But thanks to the untiring labors of men like A. A. Bunner, Ira C. Moore, Fred Rowe and Daniel Sommer the cause of primitive

Christianity grew. Along with forgotten men of their generation, they preached the gospel, established new congregations, met opponents in religious debate, and skillfully utilized the printed page. Sommer’s Octographic Review and Rowe’s Christian Leader reflected and shaped the thinking of people in the Ohio Valley and the nation for nearly 60 years.

The middle of the 20th century witnessed a tremendous growth and expansion of the churches of Christ in the upper Ohio Valley. Men like Fred E. Dennis, Tom Butterfield, Sr. and Jess Nutter tirelessly preached, debated, and wrote. Their legacy continues in the men who are being trained in the Bible at the West Virginia School of Preaching.

With its location at Moundsville, the West Virginia School of Preaching offers the student of Restoration history a unique opportunity to study and visit several of these key sites in the upper Ohio Valley. In the school library are numerous Restoration books and materials, along with an entire set of the Christian Leader on microfilm. Restoration history in the Ohio Valley is a rich, vibrant study where the past encounters the present.

Alexander Campbell and His Work

Campbell was a native of Bally Mena, in the County of Antrim, Northern Ireland born in 1788. He came from Scot stock. He was educated at Glasgow University and there came into contact with the Haldane brothers and other Scots who attempted to begin a movement to restore the New Testament church as found in the Bible. The Scotch Baptists had moved remarkably in that direction, but fell short. What is today the Kirkaldy church, which was originally a Scotch Baptist Church, descends from the time of Campbell’s visit to that city in 1847. Unfortunately, some of these churches, such as the Glasites, though they enjoyed hearty growth at first, simply stagnated into little denominations that passed away not long after the deaths of their leaders. Today they are remembered more for what they wanted to do than what they did.

In 1809 Campbell arrived in the US having severed his relationship with the Seceder Presbyterian Church in which His father Thomas had served as a “Pastor.” After rejoining his father who had come to America some two years before the rest of the family, Alexander found that his thinking and biblical interpretation were very close to that of his father. Both hoped to “restore” the apostolic church, believing that when that was done all denominations would flow into her and unity would prevail in Christendom once again. However, they failed to properly evaluate human nature in this endeavor. Campbell settled in what is now Bethany, WV, some thirty-three miles north of Moundsville, and there he established Bethany College. For Campbell, separated from education, there could be no Christianity. Campbell never visited what is present-day Moundsville, but he did preach on occasion in Elizabethtown, VA which was the south end of the present Moundsville. He also preached in Ohio, Kentucky and Tennessee.

Campbell hoped to restore the “ancient order of things” bringing back to the world Christianity as it existed in the days when the New Testament was being written. The Hillview Terrace church of Christ, with the voluntary aid of several other churches of Christ in several states, is once more attempting to make the same impact on our country through educating men to go out and preach that which is revealed in the Bible and to organize churches according to the New Testament Pattern.